Experiencing the Holidays in Belgium 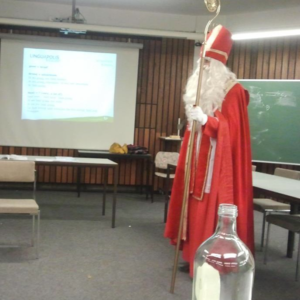 One of the best parts of traveling, studying, and living abroad is experiencing different traditions. For me, the different traditions became most obvious around the holiday season. While my friends back in the United States went Black Friday shopping to mark the beginning of the holiday season, I noticed the windows of Antwerp’s many chocolate shops quickly fill up with enticing chocolate and marzipan creations in preparation for Sinterklaas on December 6. I have heard slight variations from my Flemish and Dutch students, but in essence every year Sinterklaas (Saint Nicholas) and his companions, Zwarte Pieten, come by boat from Spain. Sinterklaas brings presents to all the good boys and girls, so children leave letters for Sinterklaas telling him what they want. The evening of November 5, they leave their shoe in front of the fireplace with a carrot or lump of sugar for Sinterklaas’ horse, and Sinterklaas leaves presents for them. I have been taking a Dutch class this semester to learn the local language, and last Thursday Sinterklaas and Zwarte Piet even came to our class in person. Sinterklaas received the letters we had written to him earlier that week, so he brought speculaas cookies and mandarins for all us “brave kinderen”. 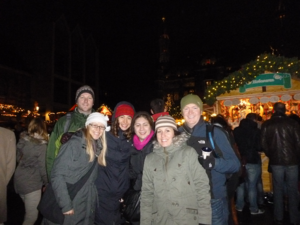 I also went with a group of fellow Fulbrighters on an amazing day trip to Germany to visit Christmas Markets. In the morning we went to Monschau, a small town near the Belgian border with a smaller, more intimate Christmas Market. For me, visiting Monschau felt like walking into one of those Christmas cards that I had written to my friends growing up. I am from Orange County in Southern California, so a typical Christmas for me consists of going for a walk along the beach with my sister, sitting under the palm trees as we watch the waves roll in. If the weather is especially cold, we might need to wear a sweatshirt. On our way to Monschau, though, a soft fresh snow was following, and by the time we arrived the entire valley where Monschau is located was covered with a brilliant white blanket of snow. The picturesque town is located along a river and filled with historic half-timbered houses, and embodied what I imagined a traditional German village to be. 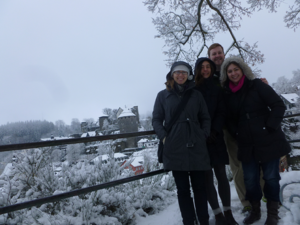 At the Christmas Market, we tried local specialties like printen, glühwein, and bratwurst, as well as more international holiday treats like hot chocolate and roasted chestnuts. Our shoes and socks were soaked through in the first few minutes (none of us had expected snow), so Becca, one of my fellow ETAs, accomplished her goal for the day of finding a pair of “ugly Christmas socks.” We also had time to climb one of the hills surrounding Monschau, which afforded us a breathtaking view of the snow-covered storybook town. We continued that afternoon to Aachen where we first visited the cathedral, whose construction began under Charlemagne in the eighth century.   After seeing Charlemagne’s throne and the ornate reliquaries in the cathedral’s treasury, we explored Aachen’s Christmas Market. This market was much bigger than the one in Monschau, covering every available space around the cathedral and the city hall. It contained children’s rides, a stage for concerts, and of course countless stalls selling local food and drinks, holiday decorations, handicrafts, and a wide variety of gifts. We ended our day with a warm mug of glühwein in the Christmas Market before heading back to Belgium in the evening. When I was younger, one of my favorite picture books was about holidays around the worl 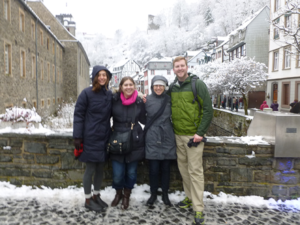 d, and these experiences brought back memories of staring at pictures of children leaving their shoes out for Sinterklaas and snow-covered European villages.   This is the first holiday season that I have spent outside of California, and it has already been amazing. In the next few weeks, I am looking forward to visiting Antwerp’s Christmas Market, seeing the controversial electronic Christmas “tree” in Brussels’ Grand Place, and celebrating with my fellow Fulbrighters at the “Cookies and Carols” holiday party.   – Heather Siegel]]>