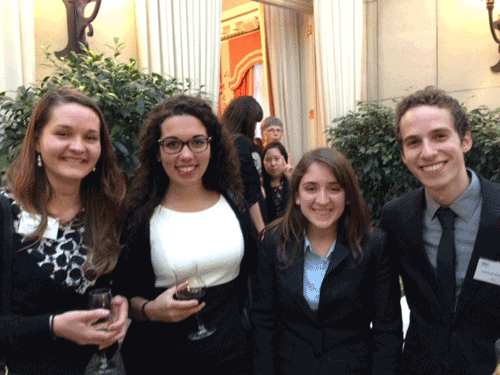 U.S. Fulbright Grantees and Schuman Scholars attended several events starting with briefings at the headquarters of the North Atlantic Treaty Organization in Brussels. Fulbright Grantees had the opportunity to hear from and voice questions to Mr. Joseph Manso, the Deputy Chief of Mission of United States Mission to NATO, who addressed the importance, uniqueness and challenges of the organization. Mr. Manso also discussed in more depth the various facets and roles of the organization in the international playing field, addressing issues such as the responsibilities of every member state in upholding their commitment to an alliance where an “Attack on One is an Attack on All” Fulbright Grantees also had the opportunity to meet and hear Public Affairs Officer John Sullivan from the U.S Mission to the EU. He discussed the complex relationship between the U.S. and EU and spoke about the U.S. and EU’s intent to combine or line up their goals. Other highlights included a discussion with Emiliano Tornese from the European Commission and Elizabeth Kraus the Deputy Director for International Antitrust from the U.S. Federal Trade Commission. Mr. Tornese a former Fulbrighter spoke about Directives transposed at the national and supranational level, banking unions and the EU’s relationship with the central banks. Mrs. Krause spoke about international competition and imbalances, the need for a coherent legal system and the importance of Convergence Laws in the today’s most pressing political decisions. The day ended with a wonderful reception at the U.S. Ambassador to Belgium’s residence. The event was cheerful and stimulating as former Fulbright Grantees delighted all guest a musical duet and as 2012-2013 Fulbright Grantees has a chance to network and talk to high profile guests and experts. More photos can be found on our Flickr stream. ]]>