Fulbright Gateway Orientation 2014 – Making Friends from around the World 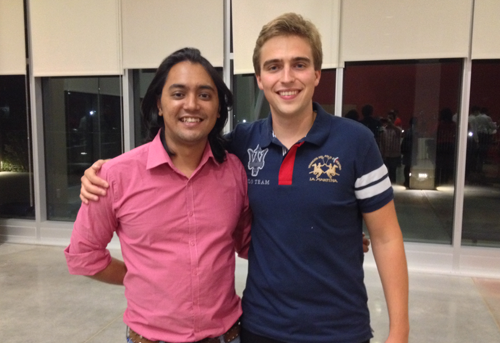 From August 4 to 8, I have attended the Fulbright Gateway Orientation at Lincoln University. Amidst the idyllic farmlands of southern Pennsylvania, I have had the privilege to form part of an extraordinary group of 67 Fulbrighters originating from 46 countries who had come together with one single goal: to engage in cultural exchange and thereby contribute to increased international understanding. The program for the Gateway was quite packed but proved to be a thorough and valuable preparation for my forthcoming academic endeavors in the U.S. The ever enthusiastic Lincoln and IIE staff provided me and my fellow grantees with an extensive overview of what to expect from American academic life, together with an initiation to American history, politics and culture. A leadership workshop allowed us to describe how we expected our new academic experiences would serve the Fulbright goals and to determine what type of leadership that would require from us. During a panel discussion, four Fulbright alumni gave us an account of their experiences and answered a range of questions about academics, social and cultural adjustment. On several occasions, we were informed on the benefits of our Fulbright grant and the responsibilities that come along with them. Apart from the wide range of seminars, the Gateway Orientation was also filled with numerous social activities. Among others, we were welcomed by the members of the Oxford Rotary Club to a dinner at the Wyncote Golf Club. In order to put our history lessons into practice, we paid a visit to nearby Philadelphia, cradle of the Declaration of Independence and U.S. Constitution. After an animating walking tour about the life and achievements of Benjamin Franklin, we had the opportunity to visit Independence Hall and the famous Liberty Bell. We also went to the Amish Village in Lancaster County and thereby gained some insight into the lifestyle of the local Amish and Mennonite communities. After a guided tour, we had a closer look at a schoolhouse, smokehouse market, chariots and farming tools. Our enriching week came to an end with a closing dinner at Lincoln University, allowing for some last group pictures and a final moment of bonding. Writing this blog on the train back to New York City, I have ample time to reflect on the past four incredible days. Without exaggerating, I can certainly say that the Gateway has been a life-changing experience. Nowhere else have I ever had the opportunity to switch from lengthy discussions on Japanese politics to an introduction to Latin American music and conversations on the history of Mauritius in a single afternoon. By learning about 46 countries in just four days, the Gateway has allowed me to acquire a wealth of information which I am sure will prove to be invaluable for my future career in International Law. At the same time, I have been able to serve as a cultural ambassador for Belgium by talking about my country to my fellow grantees. It is through sharing this unique experience with them and hearing about their dreams and concerns that I have come to realize even more how similar we actually all are. After the Gateway, I am fully aware that I am a citizen of the world community, which thanks to the Fulbright program is becoming connected ever closer. As the train is rolling forward, so is J. William Fulbright’s message of international peace and understanding. Hendrik Denys]]>