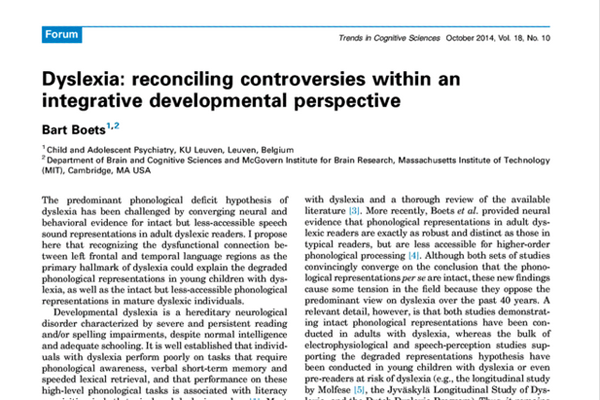 The phonological deficit hypothesis of dyslexia proposes that the core deficit of this hereditary reading and writing disorder lies in faulty mental representations of speech sounds. This hypothesis has recently been challenged by Dr. Bart Boets and his colleagues (Science, 2013) by showing that these speech representations are intact in adults with dyslexia, but the brain’s ability to access that information is impaired. These new findings caused quite some tension in the field as they oppose the predominant view on dyslexia of the past 40 years. In a new report, written during his Fulbright stay at the Mc Govern Institute for Brain Research at Massachusetts Institute of Technology (MIT, Cambridge), Bart Boets proposes that recognizing the dysfunctional brain connection between left frontal and temporal language regions as the primary hallmark of dyslexia could explain the degraded phonological representations in young children with dyslexia, as well as the intact but less-accessible phonological representations in mature dyslexic individuals. The new study, ‘Dyslexia: Reconciling controversies within an integrative developmental perspective’, appeared this month in Trends in Cognitive Sciences, the leading high-impact journal in cognitive neuroscience. As a result of this publication, Bart Boets was invited to present his ideas at Haskins Laboratories (Yale, New Haven), a leading research center about speech and reading development. Research was funded through the Fulbright Program, the KU Leuven Research Council and the Research Foundation Flanders. Boets, B. (2014). Dyslexia: Reconciling controversies within an integrative developmental perspective. Trends In Cognitive Sciences (TICS),18(10), 501-503. URL = http://www.cell.com/trends/cognitive-sciences/abstract/S1364-6613(14)00149-1 Boets et al. (2013). Intact but less accessible phonetic representations in adults with dyslexia. Science, 342 (6163), 1251-1254. URL = http://www.sciencemag.org/content/342/6163/1251.abstract]]>