Posted on November 6, 2014in 2014, Americans in Luxembourg, Fulbright, Luxembourg

Studying Physics Abroad with a Fulbright Grant in Luxembourg 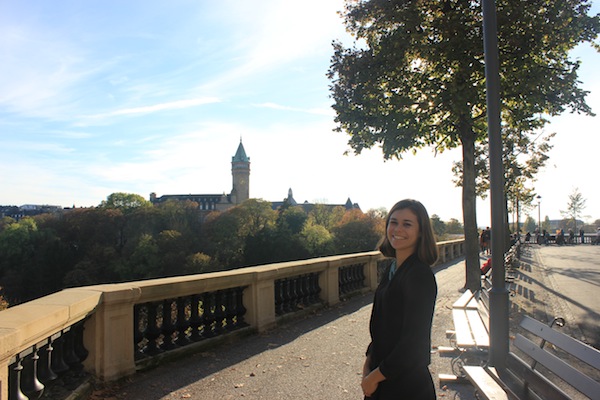 There is something inherently global about physics. Not only does the scope of physics range from quantum mechanics (the study of the smallest components of our universe) to astrophysics (the study of the universe itself) but international collaboration is ingrained in a physicist’s way of doing things. There are global collaboration projects like CERN and readily available astronomical observatories scattered throughout the world. Physicists even invented the worldwide web to improve the exchange of data. On a smaller, day-to-day scale, when reading literature on a topic, there will almost always be an instance of international collaboration. Since I’ve entered the physics community (which was only a little over two years ago with the declaration of my major) the sense of internationality has been ever-present. During my first semester studying physics, I attended a conference for undergraduate physicists where attendees travelled from South American and Asia solely for the event. During my honor’s thesis research, I collaborated with a scientist in China. When I began to look into applying for a Fulbright, I was astounded by the range of countries that had laboratories where what I had been studying as an undergraduate was applicable. On a gut feeling, I chose to apply for a Fulbright to Luxembourg—a tiny country about which I knew next to nothing—to study thin-film kesterite solar cells at the Laboratory for Photovoltaics. Since I have arrived in Europe, I have learned not only far more about the study of solar cells than I had ever imagined, but my education in the internationality of physics has continued as well. In fact, my first stop, before I even began my time in lab, was CERN—a symbol for international scientific collaboration. CERN is located just outside of Geneva, Switzerland and acts as a laboratory for scientists from over 113 different countries. Once inside, passion and excitement for scientific discovery supersedes all else—even amongst the visitors with non-scientific backgrounds. In retrospect, thinking about the nature of the Fulbright grant and my soon-to-be- colleagues I at that point still had yet to meet, beginning my experience at CERN was incredibly fitting. In my laboratory, while we don’t have hundreds of visitors filling up tour spots six months in advance like CERN does, the themes of internationality and excitement for physics still hold strong. My colleagues come from Germany, Japan, and everywhere in between, and I don’t think I’ve ever heard any less than three languages spoken in a day. Our backgrounds, both within and outside of physics, are diverse, but, we are all captivated by the science, by solar cells, and by renewable energy, which makes us far more similar than we are different. Everyone here is incredibly passionate—they come in early, stay late, and demonstrate endless enthusiasm for and genuine interest in the work being done. I think that it is safe to say that my “gut feeling” about this laboratory was correct, that my risk on a country I knew little about was worth it, because so far this experience has been everything I wanted it to be and more. — Ashley Finger Photography credit: Ashley Parker]]>