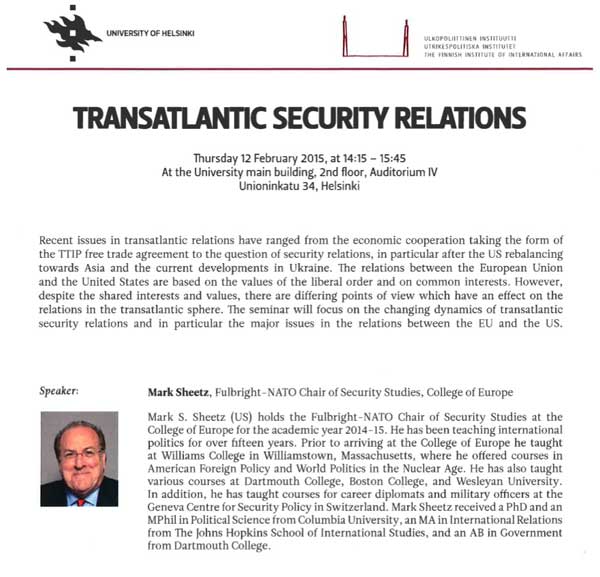 On February 11-12, 2015, Prof. Dr. Mark S. Sheetz, the current Fulbright-NATO Chair of Security Studies at the College of Europe, was invited to give lectures in Finland and did so last week under the partial auspices of Fulbright Finland. Dr. Sheetz spoke on the topic of transatlantic relations to a crowd of students and professors in Turku during an event organized by the John Morton Center for North American Studies. At the lecture in Helsinki, hosted by the University of Helsinki, the audience also included a sizable crowd from the diplomatic community, since his lecture was co-sponsored by the Finnish Institute of International Affairs. Dr. Mark S. Sheetz (US) holds the Fulbright-NATO Chair of Security Studies at the College of Europe for the academic year 2014-15. He has been teaching international politics for over fifteen years. Prior to arriving at the College of Europe he taught at Williams College in Williamstown, Massachusetts, where he offered courses in American Foreign Policy and World Politics in the Nuclear Age. He has also taught various courses at Dartmouth College, Boston College, and Wesleyan University. In addition, he has taught courses for career diplomats and military officers at the Geneva Centre for Security Policy in Switzerland. Dr. Sheetz received a PhD and an MPhil in Political Science from Columbia University, an MA in International Relations from The Johns Hopkins School of International Studies, and an AB in Government from Dartmouth College.]]>