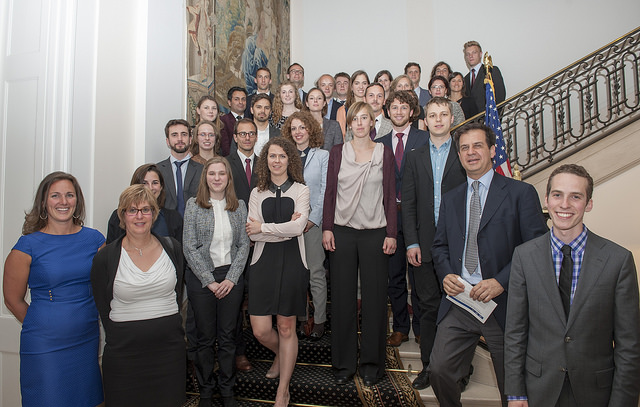 Nathan began the orientation with a few welcoming words and led into the presentation of a PowerPoint outlining: program and visa details, arrival in the U.S., payment, and getting started in the different academic programs.  Our wonderful accountant, Mireille, also spoke briefly regarding the financial aspect of the grantees’ Fulbright scholarships. The orientation continued with an excellent alumni panel, where past Fulbrighters spoke about certain aspects of studying in the U.S. Stéphanie Michiels, who specialized in Dispute Resolution at University of California Los Angeles, gave a great overview of encountering cultural differences upon landing in America. A few points she made included the general openness of Americans and their curiosity of other people’s cultures and countries. Katrien Morbée, who attended Yale University, and Glenn Magerman, who attended Stanford University, continued the panel by speaking about American academics. Katrien and Glenn both emphasized how important it is for the grantees to follow up and make appointments to meet with professors, form a network of people from different cultures, and ask any and all questions that may cross their minds. After all, Katrien explained, that is how the best and most interesting discussions are created. Katrien and Glenn continued to also speak about Gateway orientation and in-country programming. This was followed by Michiel Van Roey speaking about housing and transportation. Michiel briefly explained that while public transportation between many major East Coast cities is quite simple and straight-forward, students on more rural University campuses tend to invest in cars to get them from place to place.  Emilie Van Leemput concluded the alumni panel by speaking about vibrant campus life and the benefit of becoming involved in numerous clubs and exploring budding interests in general. Overall, the pre-departure orientation was very informative and we hope it was of help to our fabulous Fulbright grantees departing for the U.S. in the coming months!]]>