Encounters with the Belgian Garbage System 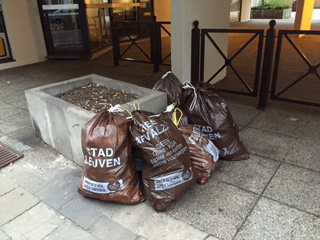 As a cultural anthropologist, I always welcome moments of encounter with unexpected cultural differences. The latest has been with trying to navigate Leuven’s garbage/recycling protocols. At my university-owned residence (a quaint medieval convent known as a begijnhof), the protocols are presented as draconian rules and are given to you with some solemnity with your keys. Even by the standards of an über-progressive Portland from where I come — where recycling and composting is the ethical norm and you are made to feel guilty about putting anything in the Earth-killing “landfill” (i.e. the normal garbage) — these seemed quite complex. Plastic bottles/cans, glass bottles, paper, and compost (food scraps) all have to be separately separated from other (landfill) trash. The glass has to be manually taken to a number of bins around town; the paper bundled or put in a closed bag or box; and the flattened plastic bottles/cans, compost, and other garbage all put into separate bags. To make things more confusing, there is separate pick-up for each of these categories: garbage is picked up every Tuesday, compost every Friday, and plastic/metal/paper every second Wednesday (counting from when?). And we are instructed that the bags/bundled paper can only be put outside for pick-up between 6 and 8 am on the morning of the appointed day. (Turns out, of course, like many things there is a bit more flexibility, as the city seems to take until 10 or 11 am to get around to my area). All fine and good, so I thought, until I had used up the bags the residence supplied and went to find replacements. Turns out, these are not just any bags, but specifically marked bags for Leuven. I was told they could be purchased at any supermarket, and indeed I easily found the blue (plastic bottles/metal cans) and green (compost) ones on the shelves, but not the specially marked Leuven brown ones for landfill garbage. I figured they were out so I went to a different supermarket, and then another, and then a hardware store, before I figured out that something was amiss, that there must be a trick. Sure enough, when I finally asked the woman at a supermarket check-out counter in halting Dutch if they actually carried the bags in question, she immediately responded in perfect English, “Yes, I have them.” Apparently, they keep the brown bags behind the counter, which was utterly mystifying until she rang them up: 11.25 euros for a roll of ten small ones! (The larger ones cost over 20 euros apparently). Assuming the bags aren’t made of gold fiber, this is either the way they finance their garbage system, or it’s incentive for people to throw out less, or most likely a combination of the two. More research needs to be done. In any case, it does still leave me wondering what those generic black trash bags that they sell everywhere on the shelves of the supermarket are good for. If anyone knows, I’ve got a roll of them I mistakenly bought that can be yours for a story. Dr. Paul Silverstein (Reed College) 2015-2016 Fulbright scholar to Belgium (at KU Leuven)]]>