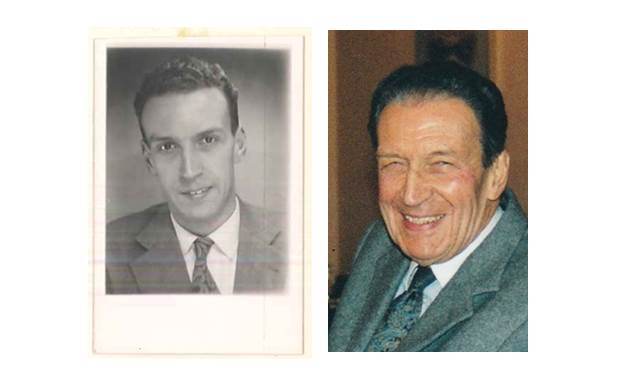 Camille Romus before leaving for the U.S. in 1960 and at a Thanksgiving dinner with Chapter Liège alumni in 2000.[/caption]   Camille Romus was born in Liège in 1921. He studied English and Dutch at a teacher training college and taught English in secondary school. He married Jeannine Thibaux and had two children, a daughter named Michèle in 1949 and a son named Philippe in 1951. In 1961, he obtained a travel grant from the U.S. Educational Foundation to teach French at Morristown School, Morristown, New Jersey for 10 months. Sadly, a few years later, his wife passed away. He was an active Fulbright alumnus and became President of Chapter Liège in the 1980s and President of the National Committee from 1990 to 1992. He continued to attend Fulbright events regularly until the early 2000s. In 2011, he lost his son Philippe. Earlier this year, he lost his two brothers. Everybody liked Camille. He was extremely kind and caring and also had a sparkling and sunny personality, full of life, intelligence and wit. We will miss him. – Nathalie Schraepen President of Chapter Belgium South]]>