Colobus angolensis, a black and white colobus monkey from the Congo known for its folivorous, or leaf-eating proclivities.  The sides of their teeth are stained black from a critical resource in their diet of leaves, stems and herbs with some fruit, and on occasion, soil.  The collection has also yielded some surprises such as an individual with M4, or a fourth molar in place of the normal three commonly found in monkeys, apes and humans. I have also begun investigating the extensive collection of Neolithic remains at the Royal Belgian Institute of Natural Sciences, including those from Hastière Caverne M, Hastière Trou Garçon and Sclaigneaux.  These are among a number of caves in the Meuse river valley of southern Belgium that have yielded group burials and are dated to the late Neolithic, about 4,350 to 4,155 years ago—just prior to the advent of the Bronze age in Belgium.  The preservation is exceptional and working with the curators has been a highlight of my visit, including verifying the discovery of a Carabelli’s cusp on a child (deciduous) molar. [caption id="" align="alignnone" width="640"] 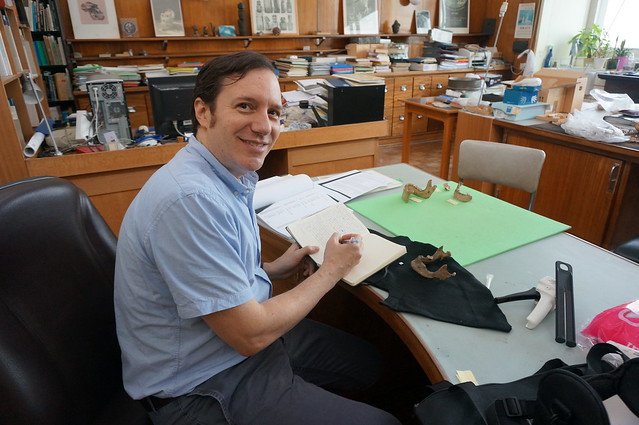 Dr. Williams studying Neolithic remains at the Royal Belgian Institute of Natural Sciences[/caption] I also had the opportunity to visit the Evolution & Diversity Dynamics Lab of the University of Liège to examine the beautifully preserved remains of Engis 2, a young Neandertal child.  The fossil will be the focus of a study of dental microwear to infer the dietary proclivities of young Neandertals based on patterns found in nonhuman primates, human foragers, agriculturalists and the Neolithic remains from the Royal Belgian Institute of Natural Sciences. [caption id="" align="alignnone" width="640"] 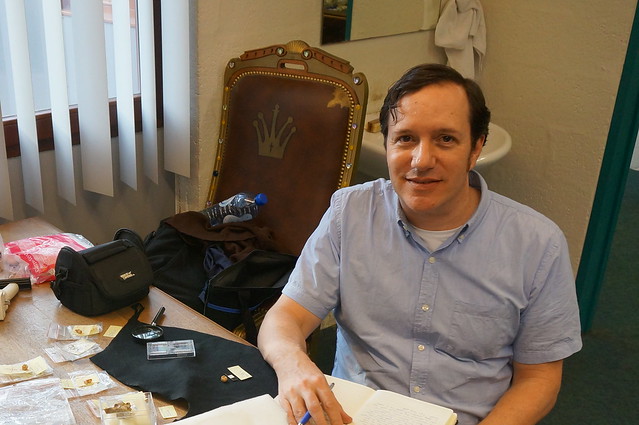 Dr. Williams examining a Neandertal fossil at the Université de Liège[/caption] Last week I was invited to give a lecture at the Vrije Universiteit Brussel http://arcpigvub.wix.com/arcpig#!upcoming/ctzx, the Flemish speaking counterpart of the Université Libre de Bruxelles.  The lecture concerned my recent publications on dietary reconstruction in fossil primates as well as my projects currently underway in Belgium.  The lecture was given to a collaborative cross-disciplinary community known as ArCPig, the Archaeology, Conservation, Palaeontology Interdisciplinary Group, http://arcpigvub.wix.com/arcpig, which includes faculty, post-doctoral researchers, Ph.D. candidates and graduate students from a variety of departments of the university.  I was asked to lecture in English given the range of languages represented by the group and the presentation was followed by a stimulating question/answer period and lunch. [caption id="" align="alignnone" width="640"] 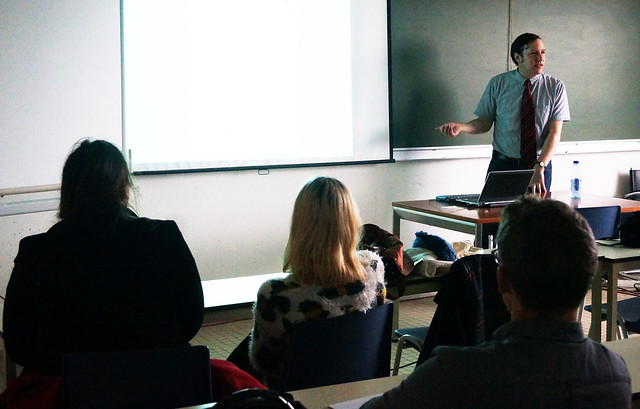 Dr. Williams presents his research at the Vrij Universiteit Brussel[/caption] While locating and returning from these various destinations, invariably I have gotten lost.  I have been impressed by the uncommon generosity of strangers who have offered directions in French, Dutch and sometimes in English.  Furthermore, the hospitality of my hosts at these Belgian institutions has been unparalleled.  These curators have been extremely generous in providing published literature, professional expertise, courtesy and access to Belgium’s world-class museum collections, adding immensely to my Fulbright experience. — Dr. Frank Williams, 2015-2016 Fulbright scholar to Belgium]]>