What’s Up with All the Bikes? 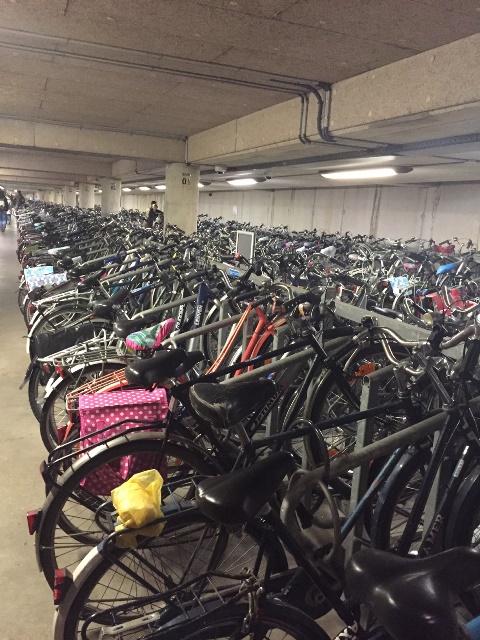 For the last four plus months I’ve been living here in Leuven, I’ve been wondering why a city that is less than 3 kilometers from one end to the other could possibly be so inundated with bicyclists.  Maybe it has something to do with the 40,000 plus students who reside in the town during weekdays when term is in session? (They nearly all disperse to family homes elsewhere in Belgium on the great Friday afternoon exodus.)  Students, after all, are notoriously late to everything, so biking might give them an extra five minutes of sleep before that first morning class. Or maybe all this bike commuting represents some cultural diffusion from the Netherlands, given the rich cycling traditions of Amsterdam, Utrecht, etc.  Of course, as the saying goes, the Netherlands and Belgium are two countries divided by a common language (and how common depends on whom you ask), with distinctions between Dutch Calvinism and Belgian Catholicism playing out not only in theological divergences, but in palpable differences in everything from fashion to urban planning to the quality of cuisine, and certainly my Belgian interlocutors would certainly be loathe to admit that they got anything from those northern stiff-necks. Indeed, when asked my Leuven friends and colleagues propose all sorts of theories (as native informants always do) that register more about their own views of themselves than provide any verifiable causal explanation.  For some, it’s a question of nature:  “It’s who we are.  Just like for you Americans with cars, so for us Belgians its bicycles.”  Now, note that most Belgians I’ve met seem to be deeply attached to and proud of their cars, and the general quality of motor vehicles in Leuven and its bourgeois suburbs is very impressive.  In Portland, Oregon where I normally live, the serious bicycle commuters (and there are many of them) tend to be ideologically against cars either because of serious environmental politics or hipster identification; indeed, the relationship between drivers and bikers is generally tense, and occasional moments of road rage are known to break out (with the cyclists tending to be the more aggressive, chasing down cars they believe have cut them off, etc.).  I’ve seen little inkling of any of this so far in Leuven, and indeed my Belgian anthropology colleagues here have no patience for such arguments based on cultural identity. 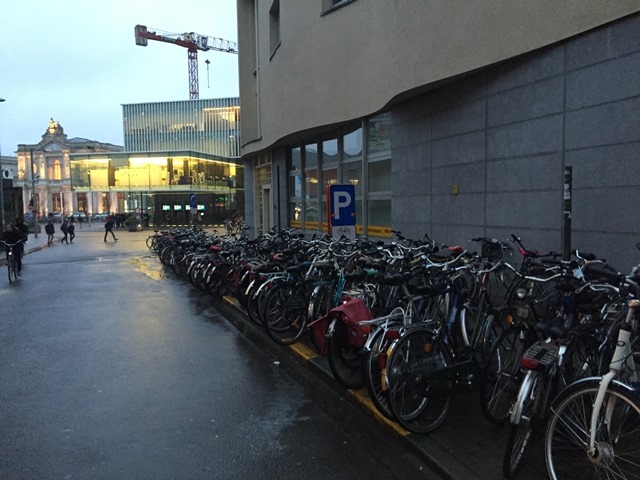 Other Leuven friends point to nurture, rather than nature.  “We’ve grown up on bicycles.  It’s as easy for us as walking.”  One particularly boyish neighbor likes to brag about doing his weekly grocery shopping on his bicycle, balancing a case of beer and several bags on his handlebars while transporting his young daughter in the seat behind.  Note that the store in question is literally three blocks from where we live.  Now, most of us from the States (at least those of us not from New York City) grew up on bicycles as well, and many of us love to go out for rides on the weekends or even for sport, but few of us wouldn’t consider doing our weekly shopping by bicycle, particularly if we owned a car (as my neighbor does). When it comes down to it, nobody in either Portland or Leuven needs to bicycle commute, and, objectively speaking, any added convenience is minimal at best.  Parking is indeed a disaster (difficult, expensive) in the city center of both cities, but all public transportation routes pass through such commercial/business districts, so chances are one can get there conveniently enough by bus or light rail.  Both areas have notoriously bad weather, making bike riding unpleasant and potentially dangerous compared to, say, southern California or the Tuscan hills.  In Portland, distances are great enough that you have to be really committed to take bicycle commuting on as a lifestyle, investing in rain gear and being willing to show up at work sweaty.  In Leuven, distances are short enough that neither of those factors is particularly an issue – but indeed the distances are generally so short that the locking up, storage, etc. of the bikes (not to mention the frequent bicycle theft) arguably balances out a good chunk of the time saved by the faster commute.  The time saving is minimal. But a couple of things further work in the favor of cycling in Leuven.  First, the infrastructure is impressive, even when compared to supposedly über-progressive Portland:  dedicated bike lanes, some of which are isolated from both car and pedestrian traffic; blue boxes at a number of traffic lights that give cyclists priority; and copious free, sheltered parking in the city center, at the train station, and on most campus locations.  Rules of the road definitely favor cyclists, with bicycles allowed to travel in both directions on one-way streets, and drivers automatically responsible for any accident involving a cyclist, thus making them much more aware and cautious around cyclists than the average Portland driver.  And, frankly, such pro-cycling infrastructure and attitudes makes walking a pain, as sidewalks are narrow, uneven, and cluttered (often with randomly parked bicycles), and cyclists, who understandably believe they own the road, fundamentally unaware of and yielding no right-of-way to pedestrians.  Finally, adult cyclists are neither legally nor socially encouraged to wear helmets, which at first blush does seem utterly insane from a public health point of view, but does eliminate what is actually a non-trivial barrier to bicycle commuting for those (unlike me) who actually have noticeable hair and want it to stay looking decent at work or school. So, after resisting for many months, I finally gave in to the imperatives of my colleagues and neighbors who insisted that if I were to live in Leuven, I absolutely had to have a bicycle, and borrowed one a friend was not using.  It is definitely a different experience of the city – one that is much more removed than walking, but admittedly much more efficient if one has multiple errands to run on different sides of town.  And, I’ve even gotten proficient at carrying bulky loads like that plastic bath tub for my young daughter which I cycled around half the ring road balanced on my handlebars.  But mostly I’m just enjoying the wind blowing through what little there is left of my hair. — Dr. Paul Silverstein (Reed College) 2015-2016 Fulbright scholar to Belgium (at KU Leuven)]]>