The Belgian Experience in WWI 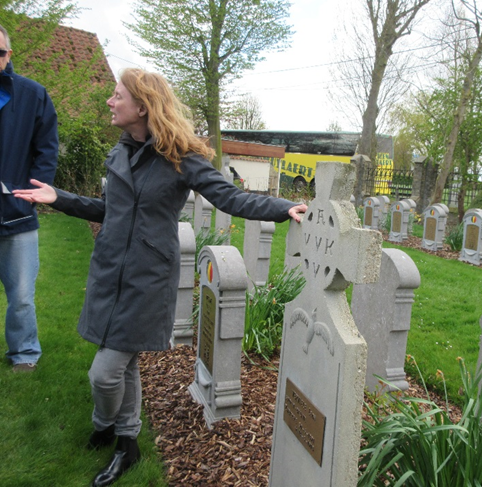 Dr. Shelby discusses the difference between the headstones at the Oeren Military Cemetery; her hand is resting on one of Joe English’s Celtic crosses (note the “AVV VVK” at the center.[/caption] [caption id="" align="alignnone" width="464"] 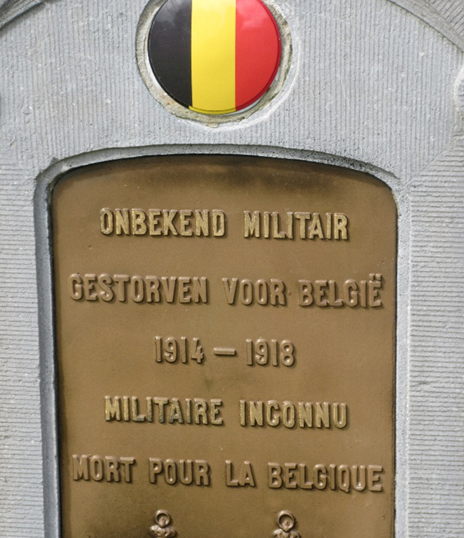 Standard, government-issued headstone (not a Celtic cross); the soldier’s identity is unknown. Note the inscription, “[He] died for his country” – in sharp contrast to the “AVV-VVK” on the Celtic crosses.[/caption] 2. Our next stop was the “Dodengang” (“Trench of Death”), a mock trench built very near the site of the Battle of the IJzer (October 1914). Dr. Shelby explained that the battle represented Belgium’s last, frantic attempt prevent further advances by the Germans – who already occupied much of the country, Brussels included. For weeks, the two armies struggled fiercely, while the near-incessant rain rendered the trenches cold and muddy. At last, as German forces seemed on the verge of crossing the IJzer River and wresting the last remaining chunk of unoccupied territory, Belgium played its final card: opening the IJzer’s floodgates. Over the next few days, the surrounding plain was gradually submerged, and, as the Belgians had hoped, the Germans found it impossible to continue their whirlwind advance. Though fighting along the IJzer and other parts of Belgium (notably Ypres) would continue until 1918, this particular chapter – with its dramatic final flourish – boosted Belgian morale in the grim first months of the war and to this day is still recalled with pride. As we threaded our way through the narrow trenches, the blue sky and bucolic landscape belied the region’s grisly past. Dr. Shelby urged us to envision the area as it must have looked in October 1914 – the IJzer swollen and churning, trenches inundated, surrounding fields converted to treacherous bogs, civilians fleeing their flooded homes – but I, for one, found this difficult: the surrounding countryside, now so lush and tranquil, seemed incompatible with an episode of such panic and despair. [caption id="" align="alignnone" width="607"] 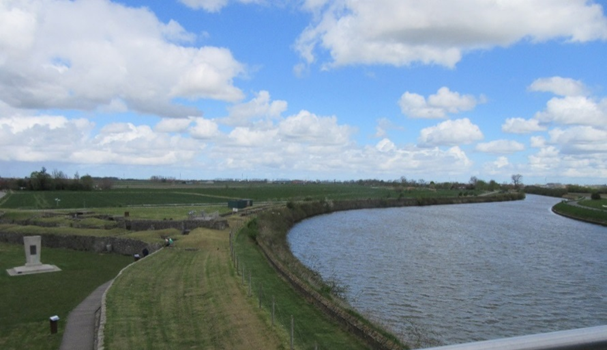 The walls of the Dodengang trenches can be seen at left; at right, the placed IJzer River[/caption] [caption id="" align="alignnone" width="570"] 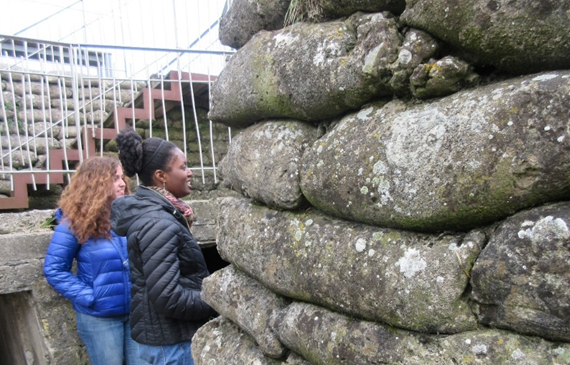 Fulbrighters at the Dodengang. The pile of cement “bags” to the right is meant to represent the sandbags originally used to bolster the trench walls.[/caption] [caption id="" align="alignnone" width="525"] 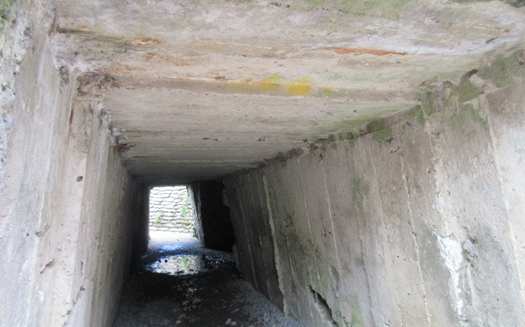 A tunnel at the Dodengang[/caption] 3. We ended our day at the IJzertoren (“IJzer tower”), a mammoth monument to Belgian’s World War I dead (particularly its Flemish victims). Twenty-two stories high and built of imposing grey-brown brick, the tower looms over the landscape; its cruciform shape and the massive lettering at the top – yet again, “AVVVVK” – link the monument unequivocally to the Flemish Movement, with its close ties to the Catholic Church and its narrative of injustice, sacrifice, and martyrdom. It is hardly surprising, then, that the memorial’s history is fraught with controversy and contention – indeed, today’s tower is really IJzertoren 2.0, since the original monument met with an unlikely end. Dr. Shelby explained that the first tower was built shortly after World War I, in tribute to the thousands of Flemish dead; over the following years, several soldiers closely associated with the Flemish Movement/Front Movement (including Joe English) were buried in the tower crypt, and the monument soon became a pilgrimage site for bereaved Flemish families. Its provocative “All for Flanders” message notwithstanding, the tower was largely viewed as an innocuous symbol of grief and human suffering. Not so after World War II: during the conflict, the Nazis attempted to coax Flanders into splitting away from Wallonia (and, presumably, allying itself with Germany instead, as Flanders was considered part of “Greater Germany”). Though such a division never took place, German appeals to longstanding cultural grievances struck a chord among some in the Flemish community (passionate nationalists in particular), and a measure of “big-C Collaboration,” as Dr. Shelby put it, ensued. In the wake of the conflict, many Belgians were infuriated by reports of such collusion, and the Flemish nationalist movement was regarded with renewed suspicion and resentment. One night in March 1946, those sentiments at last found vent in the dynamiting of the IJzertoren. The perpetrators went unpunished, and it seems likely that the Belgian government tacitly supported their handiwork. The tower we visited, then, was built in the 1950s-60s, and is even taller than its predecessor. Material from the original tower was used to construct a “Pax Gate” (“Gate of Peace”); the gate’s pacifist message is echoed throughout the multistory museum housed the new tower. Though our time in the museum was limited, the exhibits – which dealt with wartime propaganda, life in the trenches, uniforms, and weaponry, among many other topics – offered a powerful reminder of the war’s horrific scale. Our tour ended at Henry Luyten’s The Golden Painting of Flanders, an enormous painting displayed on the museum’s first floor. This somewhat perplexing work – Dr. Shelby herself laughingly acknowledged that it is “very weird” – is modeled after traditional “descent from the cross” paintings, but here key players in Flemish history have replaced the customary Biblical figures. The result is an unsettling dialogue between past and present: Luyten, painting in the 1930s-40s, presented a hodgepodge of contemporary public figures, among them nationalists and Collaborators, alongside beloved and decidedly uncontroversial native sons – Rubens, Erasmus, Rembrandt. An unusual painting, indeed, and one that pays tribute to the vexing questions of identity and autonomy that are inextricably bound up in Belgium’s World War I ordeal. Given my own interest in the effect of World War I on art and literature, I found this final portion of the itinerary especially intriguing: the painting, in spite of – or perhaps because of – its oddness, captures with remarkable efficacy the war’s complex ramifications for Belgian society. What better way to end a fascinating and thought-provoking Saturday? [caption id="" align="alignnone" width="467"] 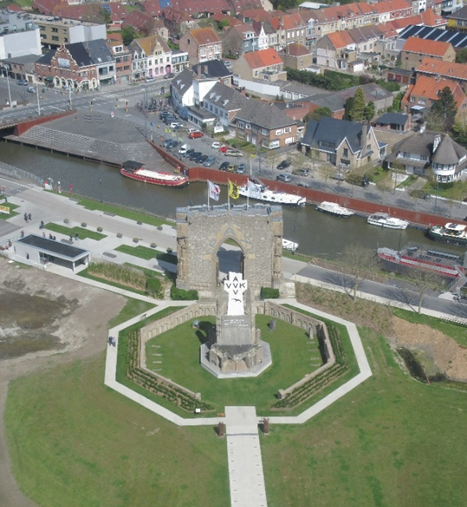 The Pax Gate, as seen from the topmost floor of the IJzertoren.[/caption] [caption id="" align="alignnone" width="733"] 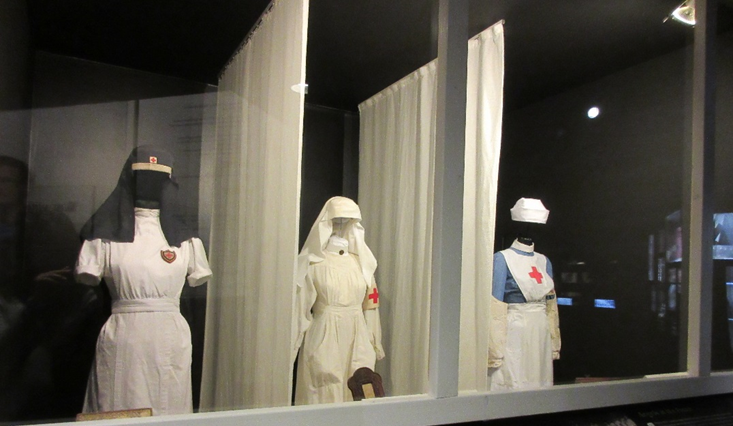 WWI nurses’ uniforms on display at a museum with the IJzertoren.[/caption] [caption id="" align="alignnone" width="787"] 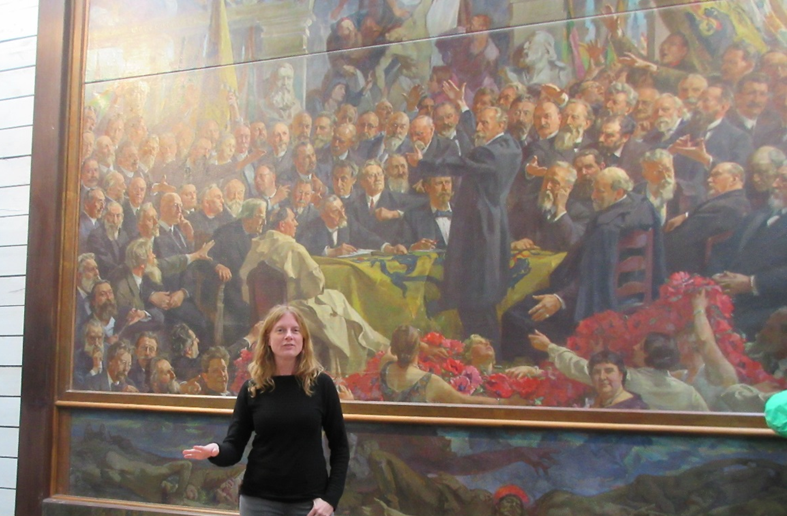