On May 11, 2016, the Fulbright Commission was proud to co-sponsor an event with Dr. Brian Klug. The event consisted of two parts: a seminar for KU Leuven faculty and students on the theme of “Revisiting Charlie Hebdo” held in SW 2:25. It was attended by 15 students and faculty from anthropology and political philosophy. Formal responses to the seminar were provided by Azar Dakwar (Brussels School of International Studies, University of Kent), Nadia Fadil (KU Leuven), Paul Silverstein (KU Leuven/Reed College), and Anya Topolski (KU Leuven/Radboud University Nijmegen). The second part was a public lecture, held at the Pianofabriek, on the theme of anti-semitism and Zionism. It was attended by 40-50 members of the general public who animated a very lively Q&A with Professor Klug. 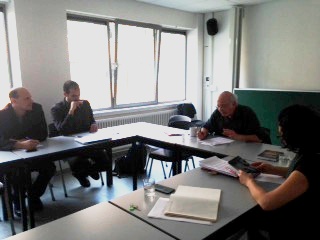 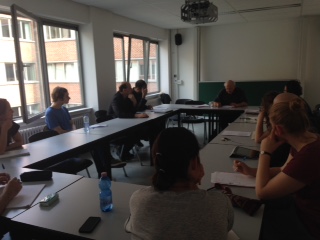 More info about this event: At the ‘unity march’ in Paris on 11 January 2015, following the massacre at the offices of Charlie Hebdo four days earlier, a lone individual carried a homemade placard that read: Je marche mais je suis conscient de la confusion et de l’hypocrisie de la situation. Focusing on the catchphrase ‘Je suis Charlie’, this seminar will explore some of la confusion (and a bit of l’hypocrisie). Confusion begins with the problem of framing. The public debate that followed the attack focused on freedom of speech. But was this the right frame to use? Or was the context set by laïcité? Or frictions within post-colonial France? Or an ongoing international conflict? Or what? And granted the importance of free speech, is there a ‘right to offend’? The seminar will take a multi-disciplinary approach to these questions and to the slogan ‘Je suis Charlie’, seeking to shed light on the seemingly ever-expanding racializing frames of mistrust, hatred and violence. Brian Klug (PhD in Social Thought, University of Chicago) is at the University of Oxford, where he is Senior Research Fellow in Philosophy at St. Benet’s Hall and a member of the faculty of philosophy. He is an Honorary Fellow of the Parkes Institute for the Study of Jewish/non-Jewish Relations, University of Southampton. He has lectured and published extensively on Jewish identity, antisemitism, Islamophobia, race and related topics. His books include Being Jewish and Doing Justice: Bringing Argument to Life (2011) and Offence: The Jewish Case (2009). In June 2015 he gave a keynote address at a symposium on Charlie Hebdo at Queen’s University Belfast. He has written on the affair for French Cultural Studies and The International Journal of Public Theology, with a chapter in a book of essays on ‘belonging in Europe’ (all forthcoming). He is Associate Editor of the journal Patterns of Prejudice and a member of both the Scientific Board of The Islamophobia Studies Yearbook and the International Advisory Board of ReOrient: The Journal of Critical Muslim Studies. Sponsored by the Europe and Its Others Seminar Series, KU Leuven and the Fulbright Commission of Belgium and Luxembourg.]]>