Number of Belgian Students in the U.S. Up Over 9 Percent

surpassed one million for the first time during the 2015-16 academic year—an increase of seven percent from the previous year, representing five percent of the total student population at U.S. institutions. More than a third of these international students studied engineering, math or computer science, and 14 percent engaged in Optional Practical Training (OPT) in science, technology, engineering or math (STEM) professions. Open Doors also reports that more than 312,000 U.S. students studied abroad during the 2014-15 academic year, an increase of nearly three percent over the previous year, and approximately a third of these students majored in STEM fields. While the Open Doors findings indicate practical experience that can be applied in careers is a key draw for students studying abroad, the data also show that an increasing number of U.S. students—about 22,000 in 2014-15—participated in non-credit work, internships and volunteering abroad. Europe remains the top destination for U.S. students going abroad, with about a third of all U.S. students choosing the United Kingdom, Italy, or Spain in the 2014-15 academic year. However, students were increasingly drawn to countries that offer an up-close look at geopolitical issues, such as Cuba, Mexico and Greece, which experienced the highest rate of growth among top study abroad destinations with an 18 percent increase.Thank you all very much for the role that your ongoing efforts have played in increasing this mobility.  We are so proud of your work and this year’s numbers. In the past 5 years there have been increases in the number of Belgian students in the U.S. at all levels of study (undergrad: +26%, graduate: +9&, non-degree: +37%, and OPT: +51%). There has been an increase of 9.3% of the number of Belgians studying in the U.S. over the last year and the number of U.S. students studying in Belgium increased slightly (+1.3%). 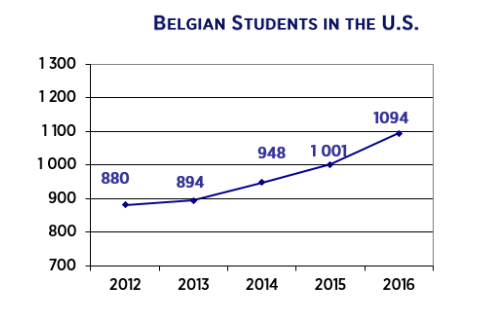 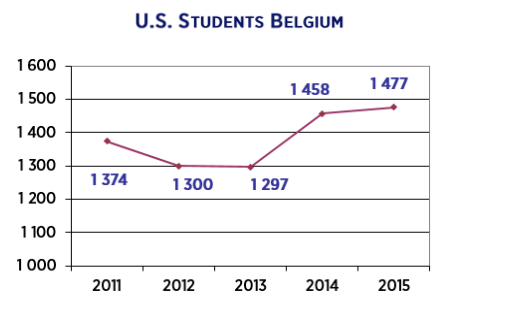 Over the past 5 years, the number of Belgians studying in the U.S. has increased +24.3%. 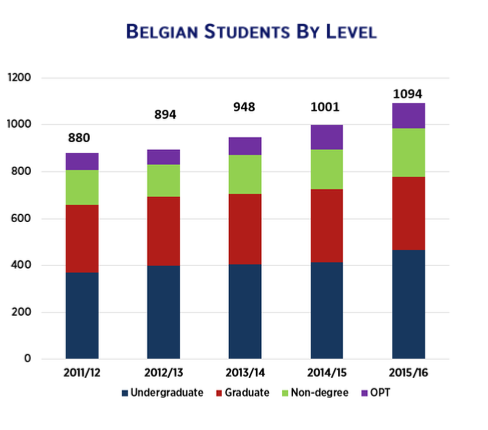