Studying Race and Memory at a Southern University

Dr. Jozefien De Bock is a 2017-2018 Belgian Fulbright scholar to Clemson University. A postdoctoral researcher of history, her project is entitled “Mill Town Memories: The Desegregation of the Textile Industry and its Impact on Race Relations in the South”. Below, Jozefien discusses her experience studying race and cultural memory in Greenville, South Carolina. When I first applied at Clemson University, it was for its vicinity to the area that would become the case study of my research: Greenville (SC), self-proclaimed ‘Textile Center of the World’ in the 1950s. The mill villages and mill town memories I am studying are about an hour’s drive away from Clemson, and the university itself harbors a wealth of information about the textile industry, including an extensive library collection and many archives from former textile magnates and companies. From a research-point of view, Clemson is the perfect location to carry out my work on the integration of the Southern textile mills in the wake of the 1964 Civil Rights Act. But moving into the intricate field of racial studies, and especially the issue of race and memory, being here at Clemson has started to take on a whole new meaning for this research. It is only in the aftermath of the riots at Charlottesville (VA) that I have become aware of the long-standing debates concerning monuments and names of controversial historical figures that many Universities in the US are dealing with. The much-debated decision announced by Yale president Peter Salovey in February this year to rename the university’s Calhoun College (named after the 19th century senator and vice-president John C. Calhoun, famous for his ardent support of slavery) was not the result of a local squabble, but rather part of an ongoing, global discussion. 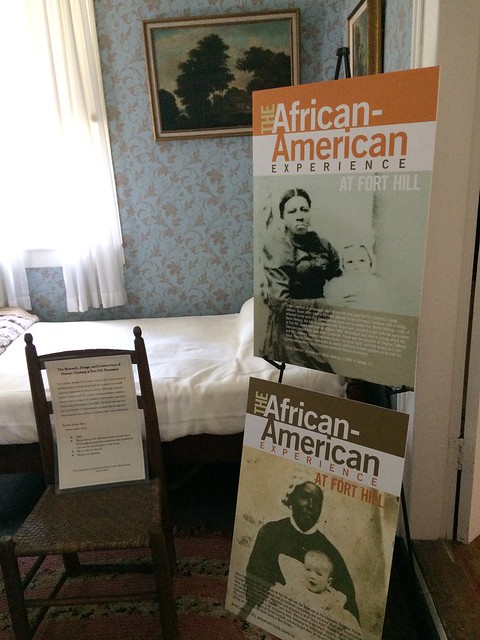 Whereas many US universities have taken the issue very seriously, setting up Committees and organizing conferences dealing with the question, Clemson University does not yet seem to be ready to take such steps. Of course, whereas Yale scholars can easily claim that “removing Calhoun’s name in no way weakens our commitment to honoring those who have made major contributions to the life and mission of Yale”, this is much harder for Clemson. Clemson University was constructed on the former plantation of John C. Calhoun, and founded through the bequest of Calhoun’s son-in-law, which also required that the Calhoun home, Fort Hill, would remain “open for the inspection of visitors.” Thus the Calhoun home (see picture) is still standing at the centre of the university campus today, preserved more or less as it was when Anna Maria Calhoun and her husband Thomas Clemson lived there in the second half of the 19th century. This legacy makes the issue highly sensitive, but also crucial for the University to address. Today, the University website’s biography of Calhoun does address the fact that he was a slave-owner, a supporter of slavery, and an ‘ardent believer in white supremacy’. Visitors to Fort Hill are told about the African-American slaves living at the plantation, and a number of pamphlets and banners in and around the house tell the history of these African-Americans at Fort Hill (see picture). Still, Clemson University’s governing bodies do remain remarkably silent about the whole issue. This is all the more striking as Clemson is not only home to the Calhoun family home and the Calhoun Honors College, but also to Tillman Hall and Tillman Auditorium (named after notorious white supremacist Benjamin Ryan Tillman) and the Strom Thurmond Institute (named after senator Thurmond, a strong opposer to Civil Rights). There are many voices among the student body, faculty and staff at Clemson that are demanding these names to be changed, or at least a public debate to be had, but so far, the University’s Board of Trustees does not seem inclined to open the discussion. In July 2015, in the aftermath of a deadly shooting by a white supremacist in a black South Carolina church, the back wall of Tillman Hall was spray-painted with anti-Tillman slogans, and two open letters from past presidents of the University’s Faculty Senate asking for the renaming of Tillman Hall were published on Clemson’s website. Since then however, the debate seems to have died down, at least in public. I am curious to see where all of this will go during my time here at Clemson. Articles are written by Fulbright grantees and do not reflect the opinions of the Fulbright Commission, the grantees’ host institutions, or the U.S. Department of State.  ]]>