About weeks full of interesting and enriching experiences

Secondly, my research stay allows me to discover some cultural particularities of Yale University and New Haven. One remarkable feature is the attention American universities pay to internal community building. The most famous examples are the university merchandise (the Yale pulls, sweaters, T-shirts are everywhere) and the popular sports teams. As an anecdote, I want to focus on another peculiar event. In the beginning of September, we received an invitation for the birthday party of Handsome Dan. Whose birthday party? Handsome Dan is an actual bulldog who serves as the mascot of Yale University. He is pictured on shuttle buses, has his own Instagram and Twitter accounts and is part of a huge merchandising campaign. He is even well-known by the public at large, as he was already included in overviews of the most famous dogs in history (together with the Soviet Space Dogs and the Legend of Greyfriars Bobby) and was photographed with former American presidents and rock stars. On September 23, 2017, Handsome Dan XVIII was turning one year old and members of the Yale community were invited to celebrate this occasion. There was food and entertainment for everyone, including a few performances by special guests (such as the Yale cheerleading team and a student’s brass band). The event reached its climax, of course, when the birthday boy joined the celebration. People were queuing to capture a glimpse of the dog, who clearly seemed to enjoy the attention. One could wonder whether it is absolutely necessary to organize such an event for the anniversary of a bulldog, but again, it exemplifies again how much importance American universities attach to building a sense of community. Everyone admires Handsome Dan, irrespective of their social background, race or religion. He brings people together. 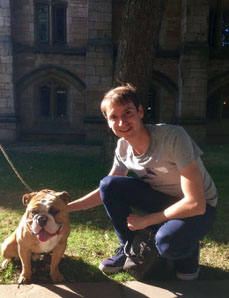 As to my own personal development, it has been an amazing experience as well. In the past, I already had the opportunity to go abroad for some time, but I have never been part of an international community which is so diverse and full of promise. In interaction with others, I consider it a holy duty as a Fulbright scholar to set the first step, to speak the unspoken, to show genuine interest and to listen with my entire self. This is key to achieve the idea of mutual understanding which Fulbright is striving for. My enrichment seminar in Huntsville is also worth mentioning in this regard. I had the occasion to meet 97 Fulbrighters from all over the world (i.a. from Tadzhikistan, New Zealand, Moldova and Myanmar), to visit some remarkable and interesting places in Alabama (the U.S. Space & Rocket Center, the Birmingham Civil Rights Institute, three universities) and to have dinner at the house of an American host family. This experience of cosmopolitanism was truly inspiring, energizing and thought-provoking. It changed my outlook on the Deep South, its inhabitants as well as on other cultures 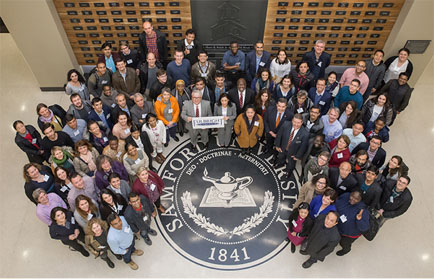 I am truly thankful to the Fulbright program for allowing me to carry out a postdoctoral research in the US. I have no doubt that the next months will continue with the same intensity as they have done so far, and I already know for sure that this year will be a period of time that I will foster for the rest of my life. – Wannes Vandenbussche (Fulbright Research Scholar 2017-18) Articles are written by Fulbright grantees and do not reflect the opinions of the Fulbright Commission, the grantees’ host institutions, or the U.S. Department of State.]]>