From Montgomery, our trip went on to Selma, yet another iconic city in the history of Civil Rights. Selma was beautiful, a real old Southern Town. We drove across the Edmund Pettus bridge, where on March 7th, 1965, nonviolent protesters were brutally attacked by State Troopers and local hotheads. The events became known as Bloody Sunday, led to a public outcry, more marches and eventually enabled the passing of the Voting Rights Act in the summer of that year. It was strange and chilling to stand at this quintessential place where violence was ubiquitous only 50 years ago, and realize that even though a lot had changed, the same kind of violence is still taking place throughout the United States. It was also sad to see how the city center was run down, most of the shopfronts empty or uncared for. It still being Sunday in the Bible belt, the visitor center for the Historic Trail was closed, so on we went. We were hoping to spend the night somewhere interesting but ended up in a roadside motel in Mississippi, as we had made no reservations and it was hard to find a place that accepted our little dog. Driving through the dark with Nina Simone’s Mississippi Goddam on the radio, we let the impressions of the day sink in. 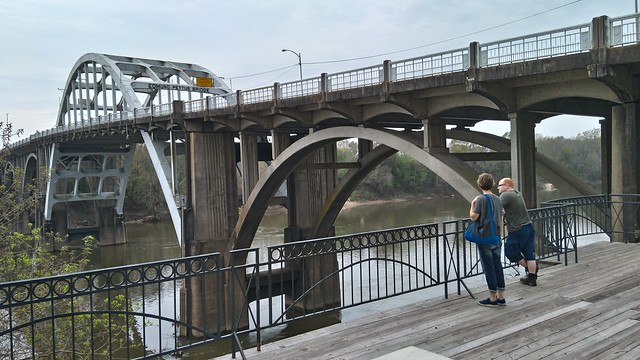 On Monday, we decided to take a break from history, visiting a random museum of curiosities, the Fontainebleau State Park and Lake Pontchartrain. The bright sunlight and extreme beauty of the tropical forest stood in stark contrast with the dark history we had been dwelling upon only one day before. We drove across the lake and into New Orleans at sunset, breathing in the smells of the city – swamps, fried seafood, exhaust pipes and jasmine flowers. The Saint John’s and Saint Patrick’s parades had just passed through and all the houses in the Garden District, where we stayed, were covered in Mardi Gras beads in all colors of the rainbow. New Orleans enchanted me – if I could, I would move there tomorrow. On Tuesday, we enjoyed the many pleasures the city had to offer – fresh food, museums, parks … The next day, we continued our ongoing education by taking a Hidden History Tour. Organized by Hidden History, a local publishing, research and touring company, the tour took us through the different corners of the French quarter and into the Louis Armstrong Park, telling the history of New Orleans from the perspective of its African American inhabitants. The tour was advertised as ‘What they don’t teach you in the Great American Schools’ and was precisely that. Our guide was prof. Malcolm Suber, a highly knowledgeable and highly activist political scientist, whose passion for this topic radiated throughout the 90 minutes that he spent with us. The tour showed us a completely different side of the city we had been wandering around in the day before – it was a necessary corrective to the information provided by travel guides and tourist brochures. 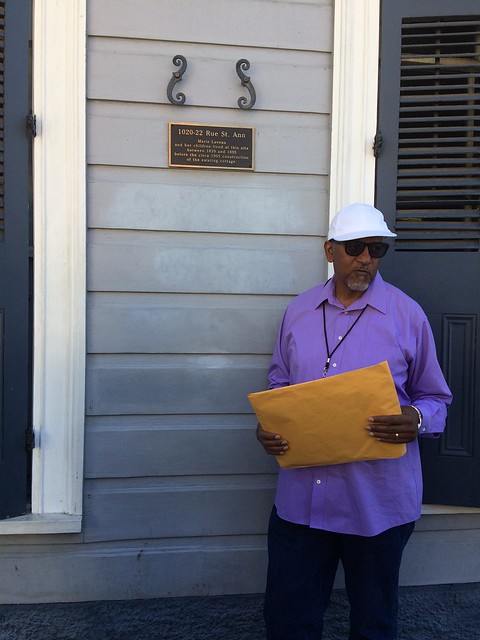 Leaving New Orleans early Thursday morning, we drove back to Mississippi, then Florida, spending the night in the beach town of Navarre. Friday was a special day for us, as we commemorated the death of a loved one to the backdrop of a gorgeous sunrise on the beach. Spending the night in another roadside motel in Georgia, we ended our trip on Saturday in Macon, Georgia. Another beautiful Southern town, much more alive then Selma, Macon is the birthplace of African American rock and soul legends Little Richard and Otis Redding. It is also home to the Harriet Tubman African American Museum, named for the courageous African American abolitionist who has come to be the face of the Underground Railroad, the network of activists and safe houses set up to help enslaved people flee towards freedom before the end of the Civil War. Apart from a small exhibition on the life and work of Mrs. Tubman, the museum has at its core mission to showcase the work of local African American artists, such as the inventive and colorful Mr. Imagination, and inform people about the lives and minds of African Americans in Georgia and in the United States at large. The ground floor has an exhibit on segregation, with some powerful pieces such as a ‘Whites only’ drinking fountain and a pamphlet from the Memphis Sanitation Workers Strike (where Dr. Martin Luther King was killed). It also holds a number of ‘Black Memorabilia’, objects made in the image of African American men and women, which are often offensive and insulting and are collected by the museum as documents of racial stereotyping. On Saturday evening, we got back home after a short/ridiculously long drive of three and a half hours – about the time it would take to cross the entire length of Belgium. Our heads were filled with new ideas, images and sounds, and we were ready to get back to work. Dr. Jozefien De Bock, Clemson University (SC)]]>