Calix O’Hara is a 2017-2018 American Fulbright student researcher to Ghent University. A recent graduate of Loyola University Maryland, Calix has spent the year researching “Craftsmen in the Medieval Low Countries: Metalworking Guilds seen through their Craft.” One of the most interesting aspects of my research this year in Belgium has been the opportunity to enter the archives and read directly the medieval sources. In the United States, medieval handwritten documents in libraries tend to parts of special collections, manuscript witnesses of well-known, important or unique literature specially purchased from European vendors some time in the past. This has a special impact on the interaction between American students and manuscripts. Access to medieval books is difficult; requests must be submitted for viewing particular documents and reasons must be given why the document must be handled in person, rather than via digital images usually available online. Libraries are (understandably) reluctant to give access, and when access is given it is usually access to the less spectacular witnesses. Requests are often rejected unless the student shows that they have had training to handle medieval documents or that they will be supervised by someone who has. The situation in Belgium is quite different. Many major cities have state archives containing thousands of documents from the Middle Ages and Early Modern Period. Aside from this, many smaller cities also have city archives run by municipal governments, containing similar documents pertinent to local history. Unlike the special tomes contained in the U.S. libraries, these documents tend to be more mundane: regulations, laws, accounts, court documents, and cartularies. They are significantly more numerous than the U.S. collections, and unlike the U.S. collections most of these documents have not been digitized or transcribed. Often when the students read these documents, it has been years since they had been read, and this gives the students a unique opportunity to rediscover something. 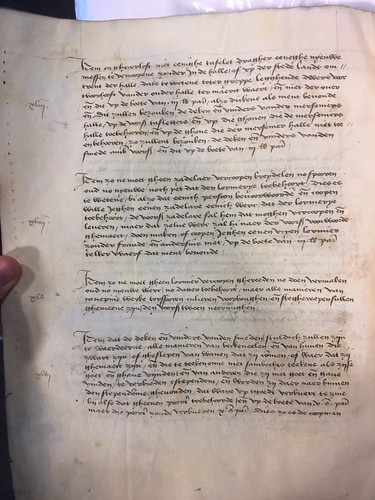 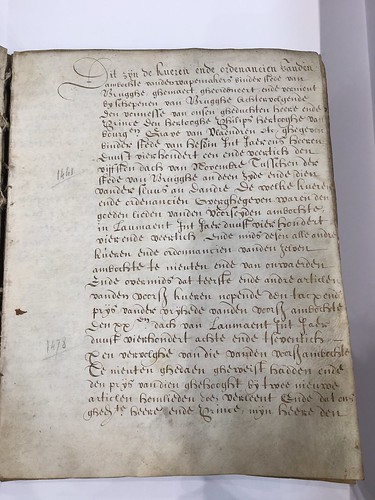 Access to these documents is easy; usually it requires little more than to leave your bag in a locker by the door and ask the archivist for documents pertaining to your subject of research. They will check the inventory for relevant key words and bring out document after document dating from almost 1,000 years ago to be read. They trust the reader to be careful with these documents and even allow pictures to be taken for personal use, in contrast to the U.S. libraries that fiercely defend the rights to their documents. For students of the Middle Ages in Belgium, this has a significant impact on the way history is studied, particularly at the master’s level. Primary sources in the United States often denotes edited transcriptions, or even translations, where transcribers and translators have cleaned the text, adding punctuations, removing mistakes, making decisions where ambiguity is present. Because they are often dealing with already released documents, it is unlikely the students will rediscover new content in their research. This is difference in emphasis is reflected in the education of the Belgian history students, many of whom take courses on paleography and learn to read and interpret medieval texts. This gives these history students a greater ability to interact directly with primary sources. Articles are written by Fulbright grantees and do not reflect the opinions of the Fulbright Commission, the grantees’ host institutions, or the U.S. Department of State.]]>