by Fulbright
During the Fulbright pre-departure orientation (where we got introduced to the program officers, fellow Fulbrighters and Fulbright alumni), we were asked to give a ‘fun fact’ about ourselves. So I explained that I grow my own vegetables in my garden in Belgium, as I am rather proud of that. But I actually also had another ‘fun fact’: I am crazy about ice cubes. Really, any drink with ice cubes will do it for me. And I must admit, I have not been let down on that front in the US. Here, your cup first gets filled with ice and then the drink is added. So that is a proper heaven for people like me (if there are any out there). I arrived in Boston during a couple of really hot summer weeks, with temperatures up to and over 100°F (38°C). So then, a cup filled with ice cubes is very welcome. But in the USA, everything is just taken up a tiny notch as to what you would expect: you can find ice machines in most buildings and even on public roads (as the machine in the photograph). It is just something you would never see in Belgium. But then again, in Belgium you find potato or strawberry vending machines… 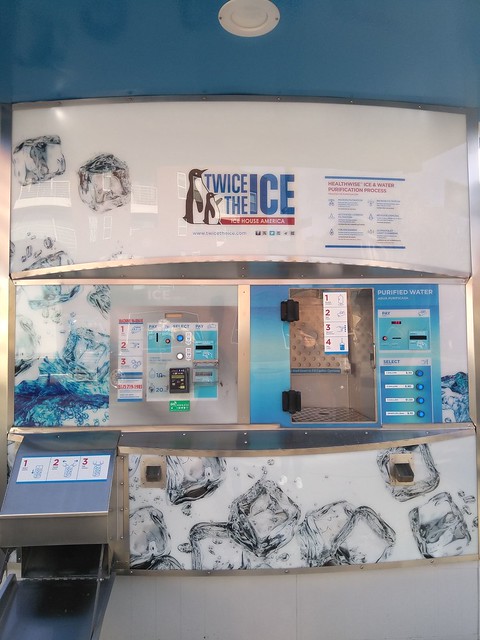 I have only been in the USA once before, for one week to participate in a conference. I remember that outside, the weather was lovely, but the air conditioners in the conference center were switched on so high, that everyone kept their coat on inside. Living in Boston this summer, with temperatures up to 100°F, I do appreciate the presence of AC, but I must admit that I sometimes wondered why the temperature inside was kept so low that half of the people are freezing inside. One big suggestion for future Fulbrighters: always carry a scarf or sweater with you during the summer! During one of the hottest days in September I found going on a three-hour whale watching boat trip to be a great way to cool down, thanks to the wind on the boat. Once in the feeding area, a naturalist helps you to recognize the different whales and takes amazing pictures of the whales in the meantime. I never thought I would see whales or dolphins from so close. 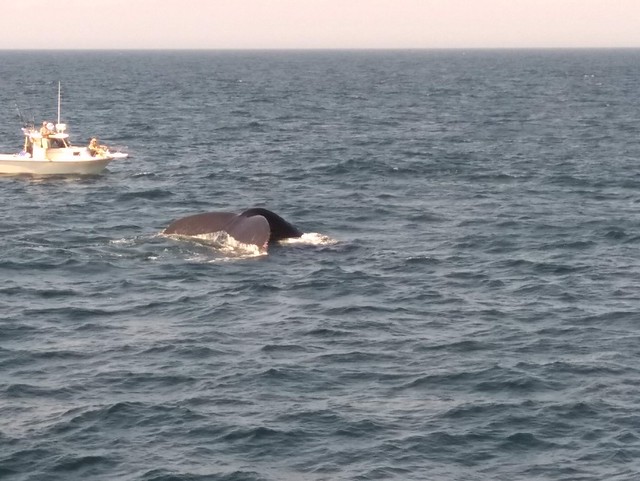 Even though the summer was rather hot and humid, people have been warning me ever since I got here about the freezing cold temperatures and the accompanying snow storms during the winter. First, however, we had fall, during which the colouring of the foliage was quite impressive. The Massachusetts Fulbright Chapter organized a visit of the Emerald necklace: a series of parks in Boston, connected to each other so that on a map they look as the separate beads of a necklace. The colours of the leaves were beautiful and kept evolving over the next few weeks. 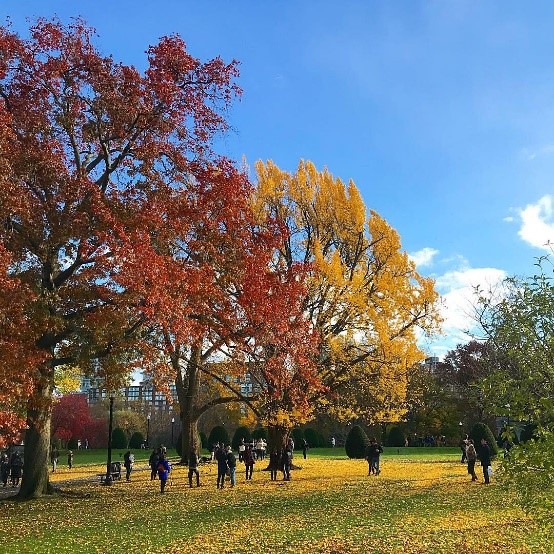 I wrote this article during the Thanksgiving break. According to the media, it was the coldest (-10°C or 14°F) Thanksgiving ever measured. I had the opportunity to celebrate a traditional Thanksgiving with an American family. The day started with watching the NYC Thanksgiving parade, followed by a party. It seemed as if there was a little game no one informed me about, where no spot on the table could be free: due to the large amount of trays and bowls filled with delicious food, it was impossible to see what the table cloth looked like. The whole experience – the atmosphere, the people and the food – was amazing. I am very happy to have had such a lovely first Thanksgiving experience. Just the weekend before, I joined a Fulbright enrichment trip to Plymouth, Massachusetts. There, we witnessed the Thanksgiving parade in USA’s hometown. The Thanksgiving parade is an American, Thanksgiving-themed equivalent of the Belgian ‘carnavalstoet’, consisting of several floats and marching bands. The ultimate finale was the passage of Santa Claus on his sleigh (of course). 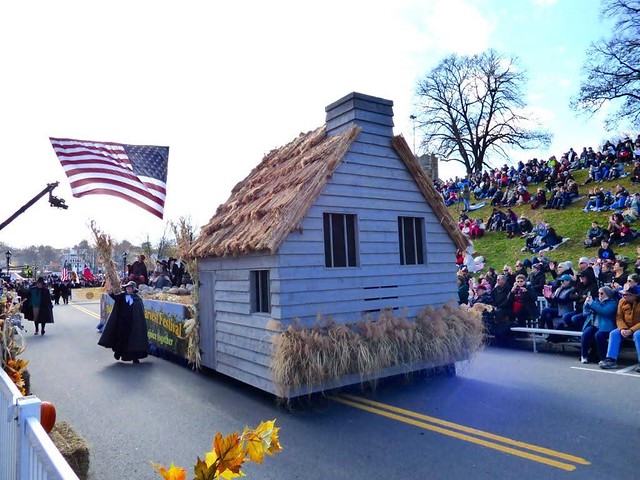 After the parade, we visited the Plymoth Plantation, a living history museum that replicates the original settlement of the Plymouth Colony from the 17th century, which was founded by the English colonists who became known as the Pilgrims. They were among the first people who immigrated to America to seek religious separation from the Church of England. At the Plantation, historical interpreters interact with the public in the first person, answering questions, discussing their lives and viewpoints as if they were living during that period. Apart from this American equivalent of ‘Bokrijk’, from which you get a really good idea of how people lived back then, there is also a recreation of a Wampanoag home site, where modern American Indians from various tribes explain and demonstrate how the Wampanoag’s ancestors lived and interacted with the settlers. It is not hard to believe, especially with the cold thanksgiving we just had, that the pilgrims were very thankful for all the help they received in surviving their first extremely cold winter. 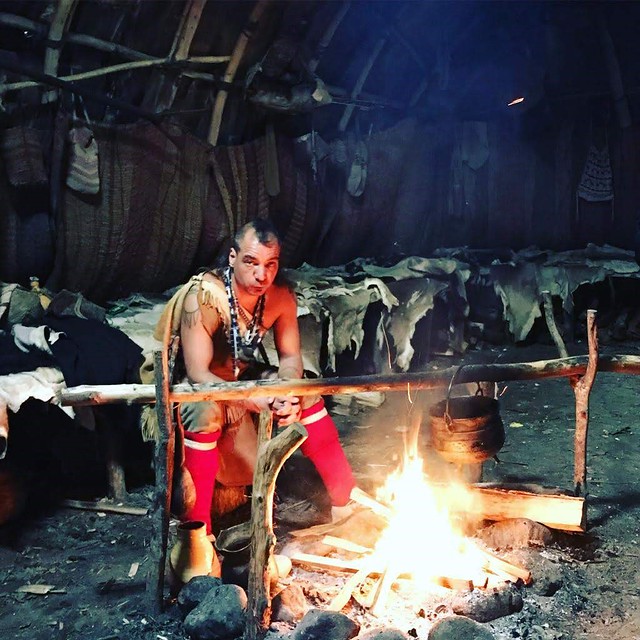 Although the history of the United States is rather young with respect to most European historical centers, the country’s history is very interesting and Boston proved to be the perfect base camp to learn more about this. I walked around Boston for hours to learn about the origin of the USA, I visited Ellis Island – the gateway to the USA, learned how the skyscraper race changed the skyline of New York City, and was amazed by the Library of Congress and numerous museums in Washington DC. I learned a lot about America’s history and realized how little we actually are taught about this in Belgium. Besides its fascinating history, the USA is also a forerunner in many fields, not the least on the academic level. I spent 4 months at a research group at MIT and was amazed by the high level of research and education. Fortunately, MIT also has a lot of humour and self-mockery, expressed in the traditional MIT Hacks and traditions: you can actually obtain a pirate certificate at MIT, the Massachusetts bridge was once measured in numbers of ‘Smooths’ and the Pi day celebration are a few examples of that.

I must admit, I was a bit afraid coming here, as it was the longest I have ever been alone in a foreign country, but I enjoyed various experiences –the ones included in this blog post are only a few – that will last a lifetime. I also learned a lot on an academic level and made some wonderful friends. To anyone who is wondering whether a Fulbright experience is something for them, I can only recommend to grab this unique opportunity with two hands, as I have not regretted it one bit. The title of this article might have insinuated a really cold experience and I must admit that that is true (I have had my share of cold hands and feet), but the actual cold was more than compensated by the warmth and friendship I encountered here. Inge Bellemans is a 2018-2019 Fulbright Visiting Scholar to the Massachusetts Institute of Technology (MIT). Having completed her PhD in Engineering at Ghent University, Inge received a Fulbright grant to fund post-doctoral research in Materials Science in which she studied kinetic and phase field modelling of combined corrosion and deposition processes. Articles are written by Fulbright grantees and do not reflect the opinions of the Fulbright Commission, the grantees’ host institutions, or the U.S. Department of State.
]]>
Prev Article Next Article